Opening Ceremony of the Congress: Inspiring Address by Msgr. Paglia 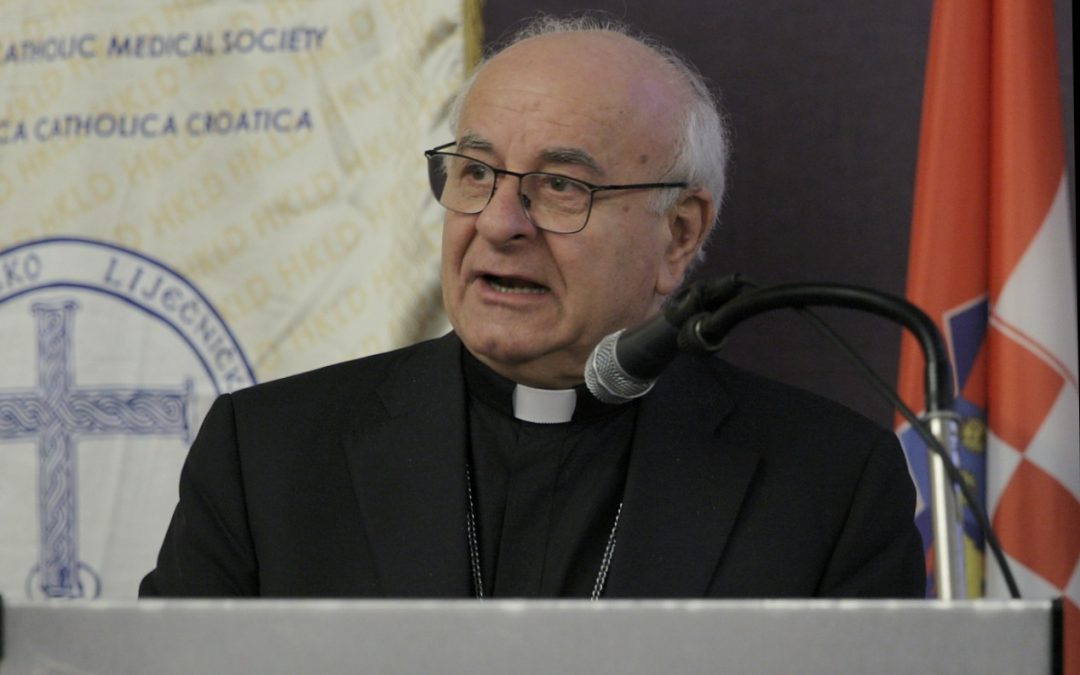 Pre-Congress Program: Inter-religious round table on the topic of euthanasia

The Pre-Congress Program started already on 30th in the morning hours with the inter-religious round table on the topic of euthanasia, attended by Msgr. Jacques Suaudeau, Ecclesiastical Assistant FIAMC, Rabbi Luciano Moše Prelević, Rabbi of the Jewish community of Zagreb, and Mrs. Lamia Allili, Islamic teacher. Metropolitan Dr. Porfirije of Zagreb-Ljubljana, who could not attend, sent his blessing for the Congress and emphasized in his message the importance of the topic of euthanasia and the joined efforts to promote the sanctity and dignity of every human life.

The first address of the Opening Ceremony, in the afternoon hours of 30th of May, was that of Msgr. Vincenzo Paglia, President of the Pontifical Academy for Life, who gave thanks to the president of the Congress, dr. John Lee, for his invitation and expressed his gladness over the opportunity to greet all participants and guests personally and in the name of the Pontifical Academy for life.

Msgr. Paglia made his remarks about the subject the Congress has chosen noting how it emphasizes the sacredness of human life “…and therefore the importance of defending, accompanying, and nurturing human life at every stage. Church tradition has always kept up a close connection between the development of cultures and knowledge, and the thinking of mankind in the context of Revelation.”

“Thus, in our present circumstances we must discern very carefully ‘the signs of the times’. On the one hand, we must be able to recognize the positive aspects of a new culture of freedom and of the dignity of the individual, developed through history as the fruit of seeds planted by Christianity.  On the other hand, we must clearly recognize the contradictions presented by excessive individualism and by the neglect of moral questions that together threaten the humanness of freedom and personal dignity.

If the ethical imperative becomes an increase of one’s own power and the satisfaction of one’s own desires and aspirations, people can no longer appreciate the value and beauty of stable relationships, of care and assistance for others, of welcome for others and of solidarity. I believe this is an anthropological taproot that can support our re-reading and analysis of, and our challenges to, the serious issues that influence present-day cultural reflection and scientific research”, underlined Msgr. Paglia.

The Accents from the Opening Address of Msgr. Vincenzo Paglia

“In particular, new technologies, by reason of their sophistication, are today the measure by which ethical challenges are judged.  The search for operational perfection—defined in relation to technically efficient performance—is attempted to be extended to human life as a whole.  With the knowledge we have available to us today, human beings—but in reality all biological life—can be analyzed, broken down, and manipulated in the smallest detail. Being able to manipulate sensorimotor, neuro-cognitive, and genetic-evolutionary structures opens up a new horizon, which we must know how to navigate intellectually in the most appropriate way in order to be able to offer ethical-humanistic responses equal to the enormous potentialities, both positive and negative, that today affect civil society and, more generally, all of human coexistence.

In this way, technologically advanced society is ready to make what is believed to be a qualitative leap: it has the power today to influence the lives of individuals and future generations directly, but without necessarily offering overall better conditions of human existence. The desire to dominate nature translates into each person’s will to control, form and empower his or her biological self:  the only truth that today seems worthy of belief is the life that people feel they can construct with their own hands.

The promise of a longer life, even the illusory promise of immortality, is the most attractive possibility that a technological society can offer.  The questions that follow from that promise are many.  Here are some of them:  Who is willing to give up a longer and healthier life for the sake of a supposed “naturalness”?  Why should we refuse technology’s offer of the elimination of all limits?  How is it possible that the act of human generation, so human and full of symbolic meaning, is thought of and presented only in terms of medical-biological reproduction?  Can we really rejoice at the idea of a life free of pain and death without accepting that it is also an existence without a destiny and without meaning?  Can we force ourselves to remove all affection, all compassion, every loving impulse that disturbs our “scientific” search for well-being?  Should we agree to remain “ignorant” about the meaning, purpose, value and destiny of human life as we know it?

Already many think that we must “perfect” individuals and the human race by eliminating all individuals who show excessive defects or unsustainable weakness (handicapped, elderly, seriously ill, etc.).  Does this mean that when we are technically more evolved, the bar of this search for perfection will rise, and lives tolerated today will become rejects tomorrow?  Can we really consider this possibility “human progress”? Most certainly not. This tendency is against everything that has made our civilization great, and will fatally lead to its decline, and in our globalized world it is harmful to all of human culture, which becomes less and less able to fight off the cultures of human sacrifice and despotic power.

In this task, our first thought cannot be about identifying enemies.  We must rather seek companions with whom to share the journey.  We must again see our jobs as a service to the whole human race.  For the Catholic Church, putting ourselves at the service of the unity and dignity of the whole human family is an essential part of our mission.  It is task both complex and indispensable.  We must understand fully its issues, its themes, and the objections that our society raises; and we must likewise free our dialogues from reductionist frameworks, we must challenge clichés, and get passionate about human truth.  Our vision must embrace both immanence and transcendence, awareness and mystery, perfection and imperfection, power and weakness, limitations and longing for the infinite, efficiency and mercy.”

Msgr. Paglia assured the present that the Pontifical Academy for Life intends to help meet this challenge by making available all the culture energy that it has acquired from the presence of scholars and experts in different fields “- from theology to philosophy, from social sciences to medicine – and coming from all over the world, to help heal those deep anthropological wounds that are both cause and effect of the new forms of insensitivity and violence towards human life, which is increasingly exposed to the power of technology and the rule of economics.”

“In a time when everything is based on technology, money, power, the market, and materialism, the verb “to accompany” recalls for us companionship, sharing, the road taken together.  It is clear that we must struggle against what weakens, or worse, eliminates, life and destroys its dignity.  But it is even more clear today that we must establish an effective accompaniment of human life in all its stages, learning the art of encounter, the art of healing relationships, of building open communities, of furnishing the tools that can refashion lifestyles and the ways of society.

This is certainly a key point in medical practice especially as it is considered in the light of the gospel. It is accompaniment that the physician is called to practice In his or her relationship with the patient being cared for.”

Emphasizing how in the Gospel, Jesus himself showed his healing power in many ways to manifest the saving power of the kingdom, concluding Msgr. Paglia expressed hope that “all of you will continue to deepen your understanding of the vocation to which you are called and which you fulfill in the context of God‘s action in the life of all men and women”.

The gathered also addressed Msgr. Bruno-Marie Duffé, Secretary of the Vatican’s Dicastery for Promoting Integral Human Development, and the opening pray was led by Cardinal Willem Jacobus Eijk, Member of the Pontifical Academy for Life, who imparted also the blessing of the Congress.

The President of the Republic of Croatia Kolinda Grabar Kitarović, under whos Hight Auspices the Congress was held, extended a warm welcome to the participants and guests from all of the world trough the video message.

On behalf of the Croatian Parliament, the participants of the Congress were addressed by the Vice-President Željko Reiner, a longtime member of Croatian Catholic Medical Society (CCMS).

Minister of Health Milan Kujundžić welcomed Congress on behalf of the Government of the Republic of Croatia and congratulated the host, CCMS, on the organization of such a big and important event.

The Congress was also addressed and welcomed by the following representatives of Croatian institutions:

In his welcoming address dr. John Lee, president of the Congress and, then, president of the FIAMC gave praise to the host and organizers: “If the organization of this year’s Congress is to be judged according to the warm welcome we have received, than we can expect a wonderful experience in Croatia. Although the CCMS is still young, its contribution to society is inspiring, and it is reflected in the promotion of Catholic ethical principles and in the impact on the professional, ethical and spiritual development of medical professionals in Croatia.” He expressed deep gratitude to the CCMS, especially Jasenka Markeljević and Ana Planinc-Peraica, for accepting the organization of the Congress.

In her welcoming address Jasenka Markeljević reported on the private audience with the Holy Father on the occasion of the Congress. She also stressed the importance of first Symposium for Youth in the history of FIAMC World Congresses.

The Opening Ceremony was attended by numerous prominent guests and representatives of various institutions, including Secretary of the Apostolic Nunciature of the Republic of Croatia, Msgr. Janusz Blachowiak, emissary of the Archbishop of Zagreb Cardinal Josip Bozanić, Msgr. Valentin Pozaić, spiritual adviser of the CCMC since its foundation and a longtime spiritual adviser of the European Federation of Catholic Medical Associations (FEAMC), Msgr. Valter Župan, bishop Emeritus of the Diocese of Krk, rev. Marijan Franjčić, canon of the Zagreb Diocese, Petar Krešimir Hodžić, Head of the Office for Life and Family of the Croatian Bishops’ Conference. Representatives of the Dean of the Faculty of Medicine of the University of Zagreb were Miloš Judaš and Davor Ježek. Also present were: Rabbi Luciano Moše Prelević, Rabbi of the Jewish community of Zagreb, Msgr. Stjepan Baloban from Croatian Catholic Theology of the University of Zagreb, Jerko Valković from the Croatian Catholic University, Anica Ježić from the Ministry of Family, Youth and Social Policy of the Republic of Croatia, Mirko Martinović Assistant Director of the Merkur Clinical Hospital and Shenida Billali, President of the Albanian Women’s Club “Croatian Queen Teuta”.

The Mass at the Zagreb cathedral

After the Opening Ceremony, the participants of the Congress joined the citizens of Zagreb in their celebration of Our Lady of Stone Gates, by taking part in a festive procession and participating in the celebration of the Holy Mass at the Zagreb’s cathedral. Cardinal Angelo Bagnasco,  President of the Council of European Bishops’ Conferences (CCEE), presided presided over the Mass in con-celebration with Archbisop of Zagreb, cardinal Josip Bozanić, and participants of the Congress Archbishop Paglia and Cardinal Eijk.

Cardinal Bozanić, who was the Honorary President of the Congress,  in his address during the Mass gave especially warm welcome to the participants of 25th FIAMC World Congress.

The Honorary President of the Congress. was the Archbishop of Zagreb, Cardinal Josip Bozanić.

The Congress was held under the High Auspices of the President of the Republic of Croatia, Mrs. Kolinda Grabar-Kitarović.